Automatic lighting system for steps of the ladder "SmartStairway SS-26"

The new model is a set of automatic LED backlight stairs allows you to connect up to 26 steps of stairs. Now you can use as a pyroelectric infrared sensors and ultrasonic rangefinders, in any combination, as you need.

Additions in this version:

- Added blocking of polling of pyroelectric sensors for powering up the system for 90 seconds. This allows you to avoid erroneous light on the stairs as a result of erroneous operations of the pyroelectric sensors during their heating during the first 90 seconds after turning on the power. Now you can use timers with the system, smart sockets compatible with Google House, Amazon Alexa and other systems requiring a complete power off of the system. Now the system will not cause false inclusions.

Read more in the user manual.

The controller for an automatic lighting of stairways by means of low-power LED light sources. One controller is able to provide coverage of from 4 to 26 stages. The controllers have the ability to enable consistent, which allows to increase the possible number of steps almost to infinity. The system provides a flexible configuration for any customer requirements. The controller can be used in conjunction with a light sensor, or without it, with passage switches simple pyroelectric (infrared) and digital sensors to ensure smooth movement series circuit when the signal from the sensors in the direction of movement of people included on the ladder. The controller has a customizable interface and intuitive settings available. Easy to install.
The controller is made in a plastic case that can be mounted on DIN-rail or attached to the surface by means of screws or screws. (see photo)

First, mount the LED strip.
Connect all "+" clips to one lead to the "+" terminal of the power supply.
Then manually alternate and one-by-one connect the "-" wire from each step to the "-" terminal of the power supply. Make sure that all steps work correctly and there is no wire shortage. Also, make sure that there is no problem in the soldering points of the LED strips. If the tapes are mounted on a metal base, pay attention that the tapes do not close on the ground. Only convinced that everything is assembled and connected correctly and the power of one step does not exceed 0.4A (for a voltage of 12V nominally 4.8W, maximum permissible 5W.) Go to the second step

- Disconnect the power supply from the mains.
Connect the test leads from the steps to the corresponding wires of the controller outputs. Note that the first step is connected to the "Out01" output, and the last step to the "Out26" output. The second step to "Out02", the third to "Out03" and so on. If you use fewer steps than 26, the last step is still connected to the "Out26" output.
After connecting all the steps and checking the correct connection of the wires and isolating them, you can turn on the power supply.
Note that shorting the wires "+" and "-" of the LED strip will result in exceeding the permissible power of one step and failure of the output on which there was a short circuit or even all groups of 7 steps of the chip on which there was a short circuit. Please be careful.
In this case, the first and last steps will be put on standby. By pressing the "Up" button "Down" you can check the LED strip lights. After that, turn off the power supply and connect the sensors according to the user's manual. Then turn on the system and adjust the number of steps you need. By default, the use of all 26 steps is enabled. If you use fewer steps and have not adjusted the number of steps used, then when you enter from the top of the step "Out26" to the next one, there will be a large delay in time during which the controller will include unused steps.
For ultrasonic sensors, the quality of the wires used is important. This should be a twisted pair of 0.5mm. square is necessarily shielded. Also, ultrasonic sensors may not work correctly when using sound-absorbing clothing or coatings. All features of ultrasonic sensors are described on the product page and in the user's manual. 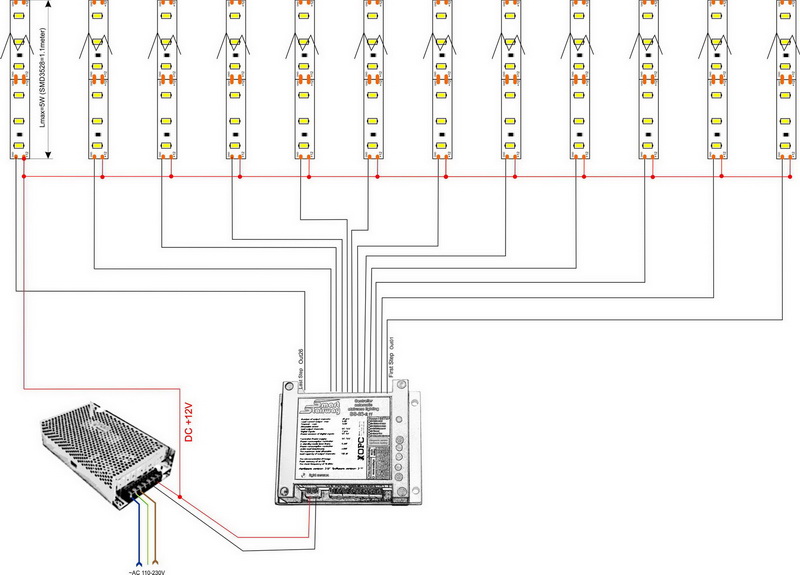 - Can I use a system with a 5V DC power supply?

The system is designed to operate with a supply voltage of 8 to 25V DC. Working with power supplies and luminaires with a voltage different

from the specified can cause damage or not stable operation of the system.

- What kind of lamps can I use?

The system is designed to be used in conjunction with LED lights or LED stripes with a voltage of 12 or 24 VDC.

The current of the luminaires or LED strips should not exceed 0.4A (0.5A maximum, taking into account the resistance of the wires at the point of connection to the controller) for one step.

Exceeding the current will lead to system failure. So for one step, the maximum power of luminaires with a supply voltage of 12V DC is 12V * 0.4A = 4.8W;

- I want to use LED stripes. What type and length can I connect to one step.

Data on the possibility of using different LED stripes, see the table:

!!! LED stripes on SMD2835 - Not recommended for use. (The reason is that SMD2835 LEDs have a power of 0.2, 0.5, 1W for a single LED. And you can never know which LEDs are used in the LED strip. You should not believe the parameters declared by the seller, since they are usually underestimated and are given for measurements on a cold LED strip in the first seconds for red LEDs. You can find out the real current strength for such LED strips only by measuring it yourself for at least 15 minutes, since the current strength of the LEDs increases as the LEDs heat up.)

- What kind of power supply should I choose?

The power supply should be selected based on the number of steps and the power of the luminaires of each step.

For example, you want to use 19 steps and install 4W lamps on each step:

The voltage of the power source should be the same as that of your luminaires (12 or 24 VDC).

- Can I use the system from the outside?

The system does not have water protection (IP20) and is designed for indoor operation.

The humidity in the controller or sensors "Smart Stairway" is not permissible.

You must ensure that it is protected against water when used outdoors. When using LED stripes from outside the room, you must reliably protect the system and the wiring from water ingress.

- I've connected everything, but I have some steps that shine less brightly than others and some do not turn on or off. What happened?

I can say with certainty that during the connection you made the closure of the wires of the LED strips or used LED stripes of too high power. This caused the failure of the controller output chips. Now they should be replaced. Also, sometimes the closure occurs when the LED strips come in contact with metal steps or aluminum profiles in which LED stripes are installed. To avoid this it is necessary to check the operation of each individual step before connecting to the controller. Also, the closure can occur when wet cleaning on the stairs and water on the LED strip without moisture protection. What can also cause a system closure and system outage. If you wash the ladder, please turn off the power to the system and turn it on again only after the staircase has dried completely.

- I've connected everything and everything works for me, but I have a big delay between switching on / off the last and the penultimate steps.

By default, the system is supplied configured to use 26 steps. If you use fewer steps, the system still spends time turning on and off unused steps. Therefore, you see a delay. You need to configure the system for the number of steps that you use. To do this, enter the menu item No. 2 and press the "Down" button until the penultimate step is turned off. Then click the "Up" button once. In this case, all your steps will be included. Press the SETUP button until the red LED is turned on continuously. Setup is complete.

- If I reduce the brightness of the stairs to less than 50%, when I turn on, I do not evenly turn on the light of the stairs. First, the LEDs begin to flicker in strobe mode and then turn on.

Starting with controller version 3.10, we have added the ability to dimming all LED strip strips. Dimming is possible from 10 to 100% brightness in increments of 10%. Then, when turned on, the brightness of each degree changes smoothly with 256 increments, changing the brightness from 0 to the maximum brightness you set. So if you set the maximum brightness for example 20%, then when the light is turned on, the system will turn on each step from 0 to 20% using 256 increments, while in one increments the brightness will change by 0.078%. During which time this happens very little and is set by you as the speed of inclusion of all the steps in paragraph 4 of the menu. Usually it is no more than 0.5 seconds for one step. As you know, not all LED strips can correctly display such a small dimming step and ensure a smooth visual effect. Inexpensive LED strips, especially based on SMD5050, SMD5730 (5630), SMD3010 LEDs, have ballast resistors in their design that cannot handle such a low dimming step with these LEDs. Therefore, visually it looks like several steps of inclusion (flashes). In this case, you should not set a low brightness in item 6 of the settings menu and use its value less than 50% or use high-quality LED strips based on SMD3528 CREE or Epistar chips.

- Can I turn on the system so that all the steps are turned on until I turn them off?

Yes, there is such an opportunity. When you press the Up button or the Down button, the steps are turned in the direction of the pressed button and will be turned on until you press either of the two buttons again. Also you can connect a button without a latch (buttons for a door bell for example) to the inputs "Up button" and "Down button". In this case, one wire from the button should be connected to the output "+ 5V", and the second wire to the input "Up button" or "Button down".